My 'Doctors Against Aspartame' top comic goes into more detail about how Aspartame dangerously breaks down in the body and how it was fraudulently approved: The Aspartame Story - The Case of the Killer Sweetener or watch the video 'Sweet Misery - a Poisoned World' to hear from doctors and industry professionals about the damage it is doing to the world.

‘I cut out diet soda completely and my taste buds changed. I could taste food again and stopped craving unhealthy foods full of sugar. ‘This helped my joints felt better and I could move my body with less pain.’ A typical quote from people waking up from the damage that diet soda does - HERE

Will drinking just one can of diet drink with aspartame hurt me?

Just one can of Aspartame laden diet drink can lead to symptoms or sometimes it takes a few years for the toxins to accumulate in the body depending on the health of the person consuming it. Aspartame is not just found in diet drinks but in diet foods, energy drinks, desserts, chewing gum, sweets, breath fresheners, weight training powders, food replacement drinks and over the counter and prescribed medications. Check the labels on everything but be warned that the labelling doesn't always indicate clearly that it contains Aspartame. Look for the name: Phenylketonuria - this a warning for those who cannot break down Phenylalanine in the body (aspartame breaks down into various components including the amino acid Phenyalanine). Often you can find it twinned with other artificial sweeteners. It's E number is E951 but that is not often stated on a label. Children are particularly at risk because of their low body weight compared to adults; the toxicity is far higher and their developing brains are at risk. Also at risk are the elderly and those with medical problems as Aspartame can exacerbate diagnosed diseases.

What are the reported symptoms of consuming Aspartame?

As far back as 1988, seven years after the initial approval of Aspartame, 80% of complaints to the USA FDA (Food and Drug Administration) were from consuming Aspartame. The long term effects that have been reported also include addiction to the methanol from the breakdown of aspartame in the body. Aspartame disease (as coined by a top American doctor: Dr H J Roberts) has become an epidemic as it mimics serious diseases such as Lupus, Multiple Sclerosis, Diabetes and other endocrine and neurological disease. See the Aspartame Injuries Pages 1 & 2 of over 900 reported injuries.

The following are symptoms attributed to aspartame in complaints submitted to the FDA by the Department of Health and Human Services April 20, 1995. 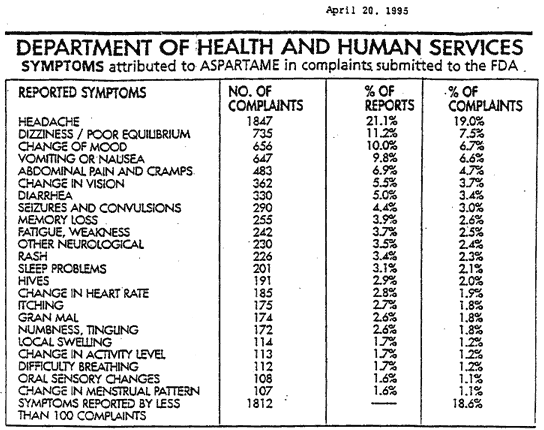 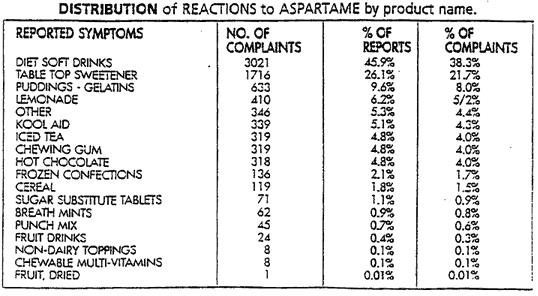 What should I do if I want to stop using Aspartame? Will this be dangerous?

Immediately stop consuming it. Depending on your symptoms or even having none you might be surprised to find that you feel better and /or the symptoms you noticed gradually or abruptly cease.
Make sure that you drink plenty of water and follow a healthy diet to give your body the best chance to detoxify from the poison. Some people contact a nutritionist that deals with toxicity in the body who might be able to advise which natural supplements will help in this area. Don't switch over to another artificial sweetener as many of them have side effects such as Sucralose. Check out my pages packed with information about research studies and injuries from artificial sweeteners.

Note: It often takes at least sixty days without *any* aspartame or nutrasweet to see a significant improvement.

I see my friends and family drinking drinks like Diet Coke; what should I tell them?

You could tell them that Aspartame breaks down into methanol (wood alcohol) like a kind of rough, industrial alcohol which makes it addictive, formaldehyde (used for embalming people) and formic acid (used in toilet cleaning products) and DKP (Diketopiperazine) which is associated with brain tumours. Breakdown to DKP is particularly problematic when heating Aspartame to high temperatures, for example, when boiling water is added to a drink containing Aspartame or drinks that lay in the hot sun. Be aware that many people are addicted and can react strongly when told that a favourite diet drink might be poisoning them; addiction is a huge problem.

...drinking even tiny doses of concentrated formaldehyde can bring convulsions, stomach pain, diarrhea, vomiting, vertigo and a host of other very bad side effects [source: U.S. National Library of Medicine]. ...

Here's a good article: What if you drank embalming fluid?

I have a page HERE showing products and medications that contain Aspartame, Sucralose & Acesulfame K. I update the list all the time. If you find a product that has Aspartame or Sucralose in and is not listed, I would be grateful if you could leave a comment so I can add it to the list, I'm particularly short of the products available in other countries including the USA.

Why is it still allowed to be consumed, why is it not removed?

Organisations such as the Diabetic Association, IFIC, FDA and other regulatory bodies have been 'bought' by the 'glutamate industry' - large sums of money change hands, you only have to watch the film 'Sweet Misery' to see the corruption in high places. I have personally been attacked on most social media forums, especially weight loss forums. I have had countless confrontations with industry trolls paid for by the glutamate industry that flood any forum with lies and false scientific information especially with negative posts or comments about Aspartame . Reddit is a good example - as soon as I starting posting about it, the trolls gave me 'bad karma' points! It would be pathetic if it weren't so tragic that millions are affected by the corruption! The FDA  are like rottweilers and defend corporate interests over the health of the people.

My name is Avalina Kreska; I'm an author based in the Shetland Islands. My family and I suffered first-hand from consuming Aspartame an...